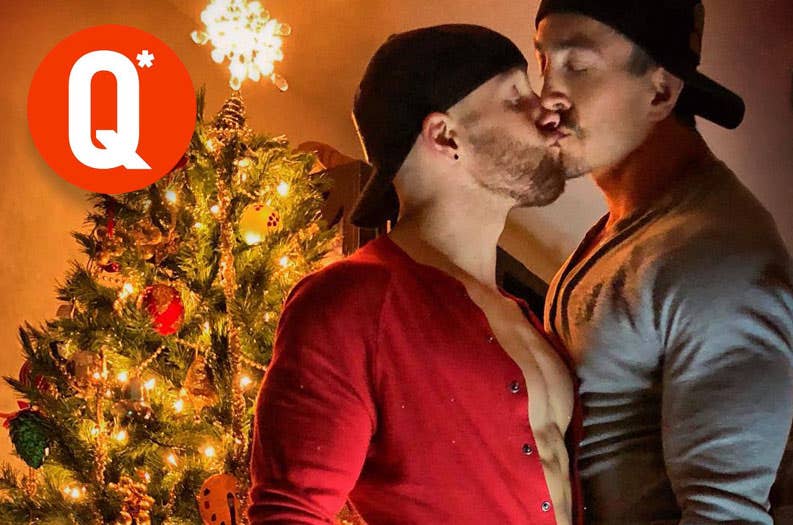 Big ol' hunks of burnin' love, Rick and Griff, are married, happy, and a voyeur's candy box, but get beyond the snapbacks and muscles and these babes in broland have something to say.

Billing their Instagram page as "The misadventures and comedic stylings of two (often nude) husbands from Atlanta." The duo, who have and audience of over 270,000 Instagram followers, usually keep it cute and flirty. However, they recently reposted a photo from a year ago, along with a clear-eyed comeback to a hateful comment. Thanks to Queerty's Instagram feed for the tip.

A year ago when we posted this pic, someone made the presumptive comment “Wow! They’re in a monogamous relationship. Strange for gay men.” The commenter himself was gay.

• We politely pointed out to him that the only facts about our relationship anyone can gather from this one picture is that we’re in the same room, we celebrate holidays, and are kissing. Whether we’re monogamous, monogam-ish, open, polyamorous, celibate or even asexual is not discernible, nor is it his business. We told him his comment not only insults gay men, but anyone out there who chooses a form of non-monogamy for their relationship. His response? “that’s why gay men can’t have real relationships, because they’re all sluts and can’t commit to one person.”

• His comments illustrate a problem within gay culture: the need some gays have to adhere to heteronormative ideals and shun those who don’t. We’re all socialized to believe certain things about love, relationships and sex. We’re told that some relationships are “good,” “normal,” and “acceptable,” while others are deviant and unnatural. Heteronormativity goes further and assumes that queer people want to be just like straight people. It also rewards the gays who ‘mimic’ heteronormative standards. And why is this a “goal” to live up to? Are heterosexual, ‘monogamous’ relationships the gold standard of success?

• Bottom line: no relationship is the same or perfect, but all are valid as long as it works for the ones in them. The rules that work for one do not automatically work for another...but one sure way to fail at ANY type of relationship is to enter into it with rigid rules and bad communication and expect it not to crumble under pressure. Love is love, and everyone is free to find it on their own terms.