Fans know the man has a sense of humor, but you really get to see it in, um, full swing, in this interview.

Far too often we see an insanely sexy guy, begin to fantasize, only to have it all go flaccid the second he opens his mouth and we realize he zero sense of humor. Sexy bod? Great. Sharp, silly sense of humor? Fun. But it’s the combo of the two that makes most guys swoon. 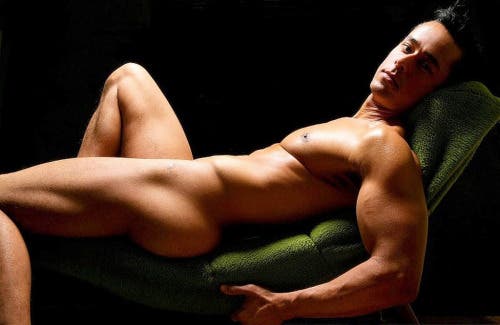 The best photo ever taken of Raphael Alencar, by Joe Oppedisano @joeoppedisano

Excerpted from the press release:

“Rafael is at the core an amazing human being. He is a smart businessman, but what most people don't know is that he is witty, quick and funny as shit, says MacNamara. "He has experienced more of this industry than anyone I can think of,” MacNamara said. “I learn from him every time he manages to formulate a sentence. This interview really shows off who he is and what he reveals will no doubt shock people.”

During the interview, conducted in a hot tub, Alencar tells MacNamara about his celebrity hookups as well as his wardrobe adjustments, given his considerable manhood and more.

“All my clothes are fitted for me. All my jeans. My waist is 27. My butt is a hundred,” he quipped. “The things get fitted because the waist is thin so I have to fit. I don’t use tight clothes. I like baggies.”

And on his celebrity hookups, Alencar said: “All the famous people. The singers and actors that you know that they are gay, they have called me, but not because ‘oh I’m going to Rafael,’” he said. “They cannot be seen in public. They cannot go to a bar, club or restaurant. They cannot have a hook up so they call 1-800 me.”

Born in Brazil where he was a successful dentist, Alencar came to the United States to grow his practice when his striking looks and infectious charm led him to the adult industry in 2003 where he became an instant sensation. He would go on star in a number of acclaimed adult films for top studios, earning him superstar status from the get go.

Watch the full interview below or on the iWantClips YouTube Channel.