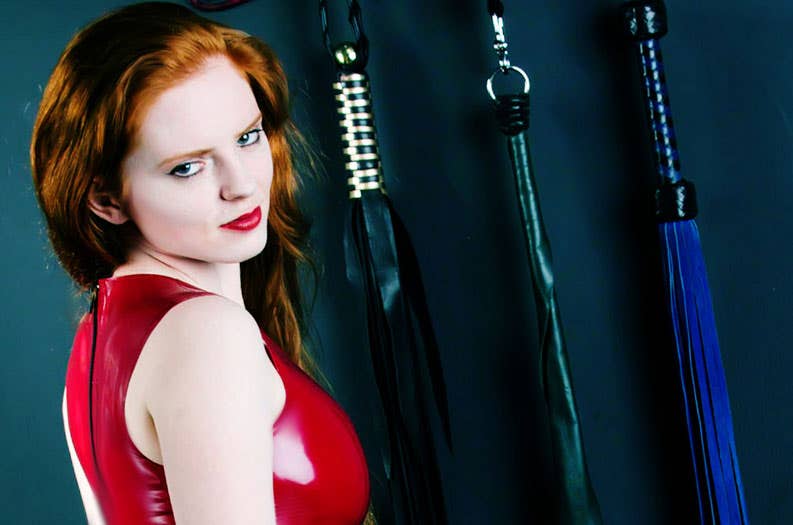 All photos courtesy of Lyra Lethe. 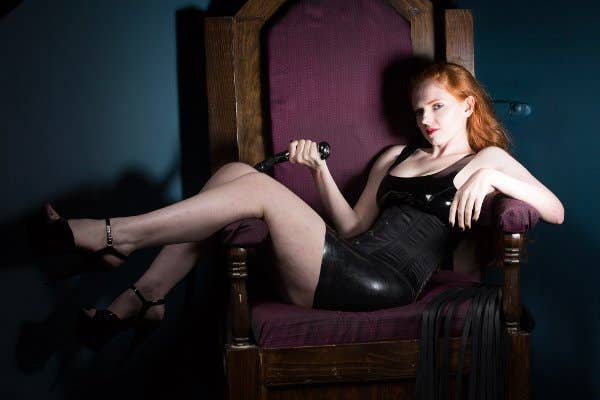 Last October at the Sex Expo at the Brooklyn Expo Center there was a constant parade of interesting people of every size, color, age, and interest. From those who didn't know a cock ring from a scrunchie to those who knew exactly what time it was.

In going through cards and checking out Instagram accounts the next day, it was clear that this was one fascinating woman. So, herewith, an interview with Mistress Lyra Lethe. 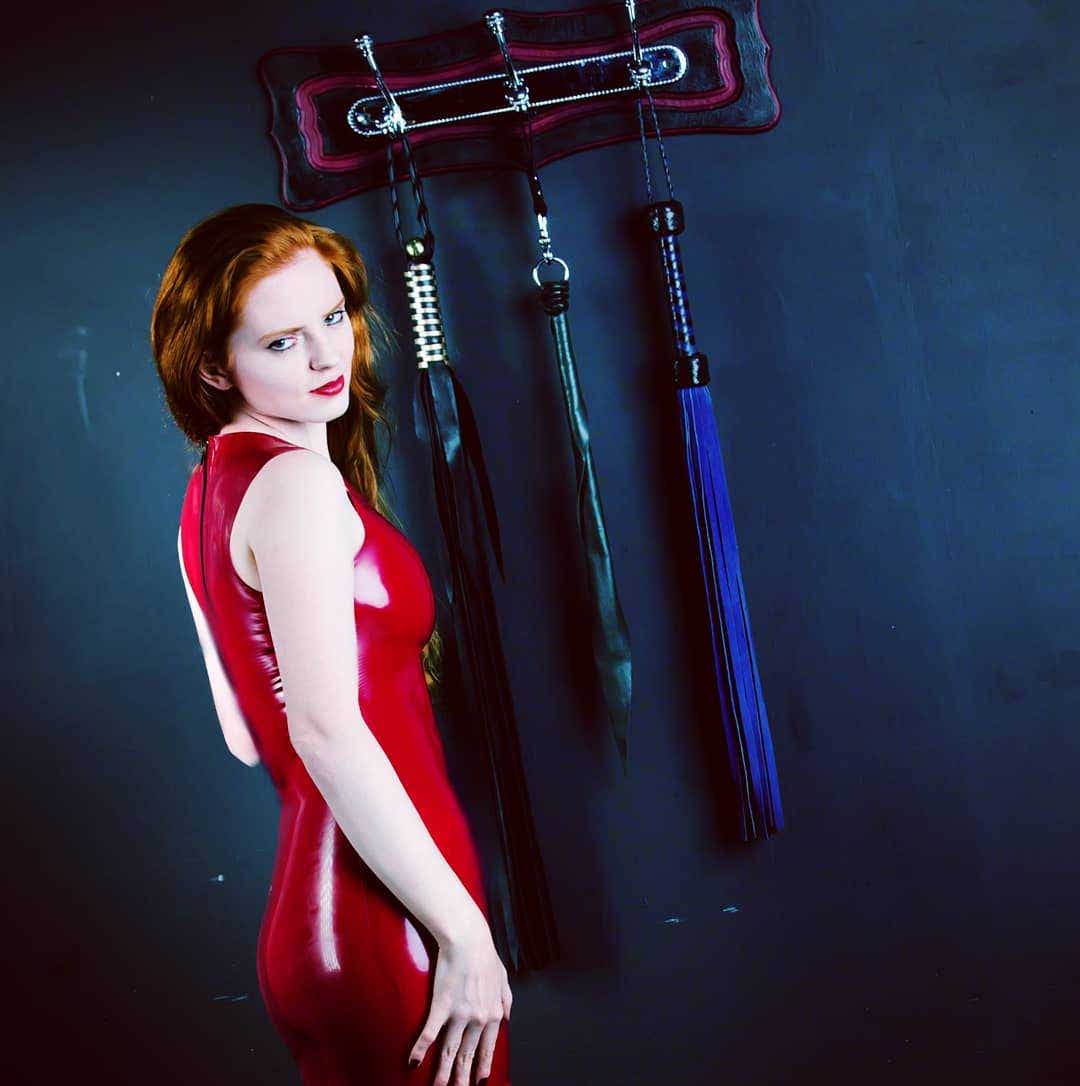 What shall I call you in the article? Lyra Lethe? Domina Lyra? And I assume the first is a pseudonym, so what’s the story behind it?

You may call me either, and I'm glad you asked about my name—I don't get that question often. I came up with it before I can remember to represent a dark, heroic aspect of myself that I dreamed of becoming. Lyra is the harp created by the god Hermes and given to Orpheus, who played so beautifully that gods wept, monsters were lulled to sleep, and he was allowed to make a rare journey to the underworld and back. After he died, having been torn apart by maenads, his lyre was placed in the night sky for eternity. Lethe is the river of forgetfulness, which flows through Hypnos' cave in Hades. Most of the dead drink its water and lose the memories of their past lives, but the few who resist and remember their true origins have a chance to become divine. 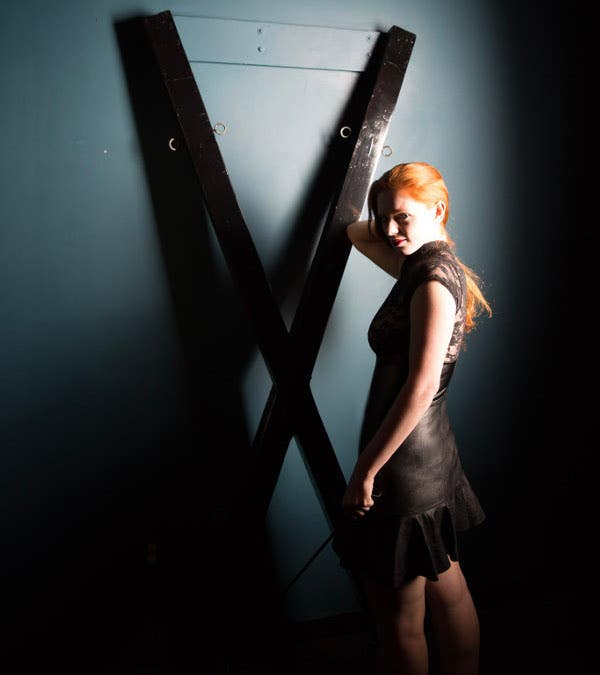 It began with a longing for another realm. I have always been drawn to power play, transgression and mystery. From early on, I remember searching for a door to the otherworld, certain that I was destined for a more adventurous existence. When I first had access to the internet, I joined occult forums and saw references to dominatrices and sadomasochistic rituals. 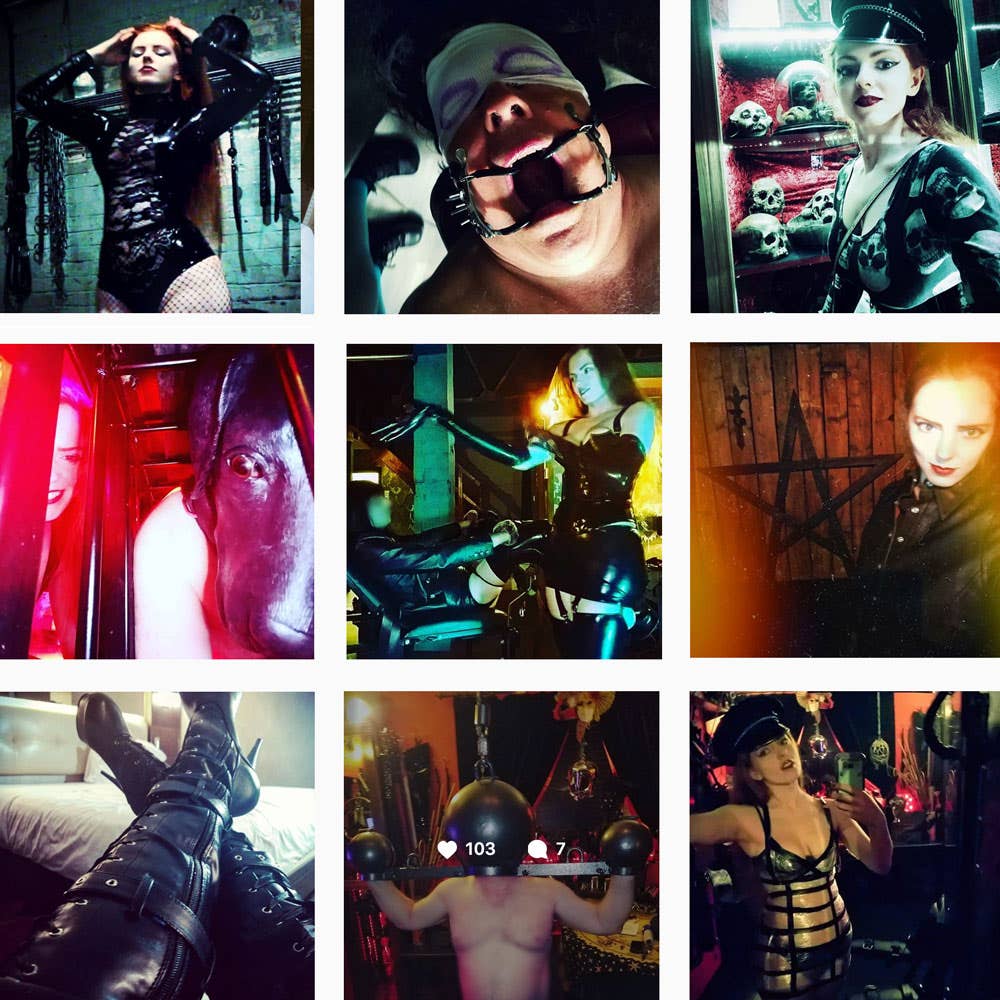 How did you learn the ropes (pun intended)?

I first started exploring when I was living in Chicago, which had a very welcoming BDSM community. I attended munches and play parties and learned as a switch. The first time I set foot in a dungeon, it was noted that I seemed right at home in the leather swing. And I jumped right in, submitting to fire, rope, and knife play. For me, the experience of submission was initiatory. Both the positive and negative experiences I had during that time taught me lessons about communication, consent, trust, and compassion that have stayed with me as a domme. Actually, rope bondage is among my weakest skills, not for lack of trying but because I love it so much I have always ended up in it. Some of my first friends in the scene were riggers who suspended me and created meditative puzzles for me to escape.

During graduate school, I started working under the instruction of a professional Mistress and learned by doing sessions with her until I was ready to develop my own practice. I have been fortunate enough to study with one of my most-admired dominatrices, Simone Justice, and to attend DomCon where I took classes with other such legends. I continue to learn all the time through the process of sessioning and forming relationships with those who submit to me. 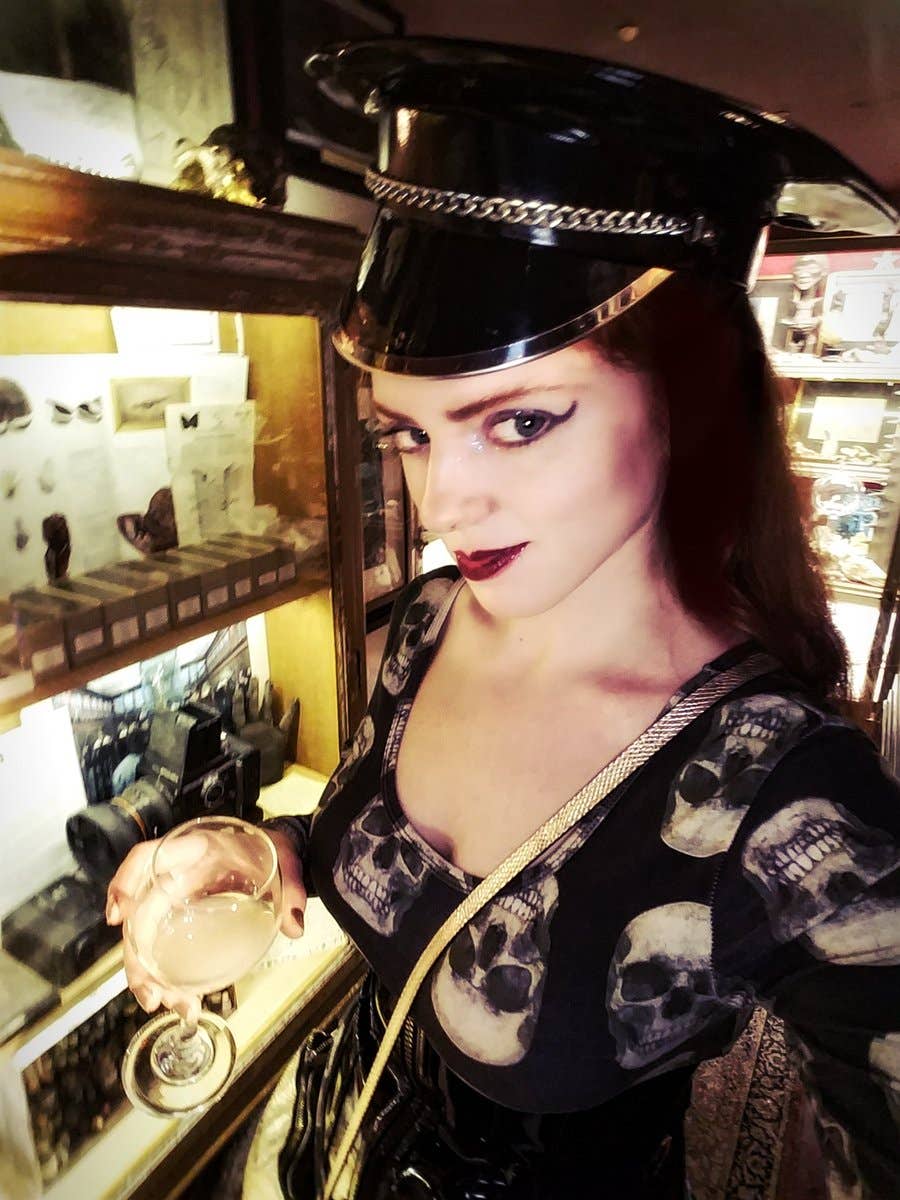 You clearly enjoy the work. Do you consider it work? What do you get out of it other than gifts and cash? Or does that matter? Would you do it for free?

I enjoy what I do very much and it is absolutely work. Domination is in my nature and it will always be part of my life. I have invested a great deal into it, financially and emotionally, and making it my profession allows me to continue to do so. The expenses—which include specialized equipment, wardrobe, advertising, travel, and dungeon rental—are high, and I devote a great deal of time and energy each week to administrative work as well as to planning each session. I pay self-employment taxes and am responsible for my own insurance, retirement plan, etc. while navigating all the uncertainty of working under criminalization and increasing censorship. 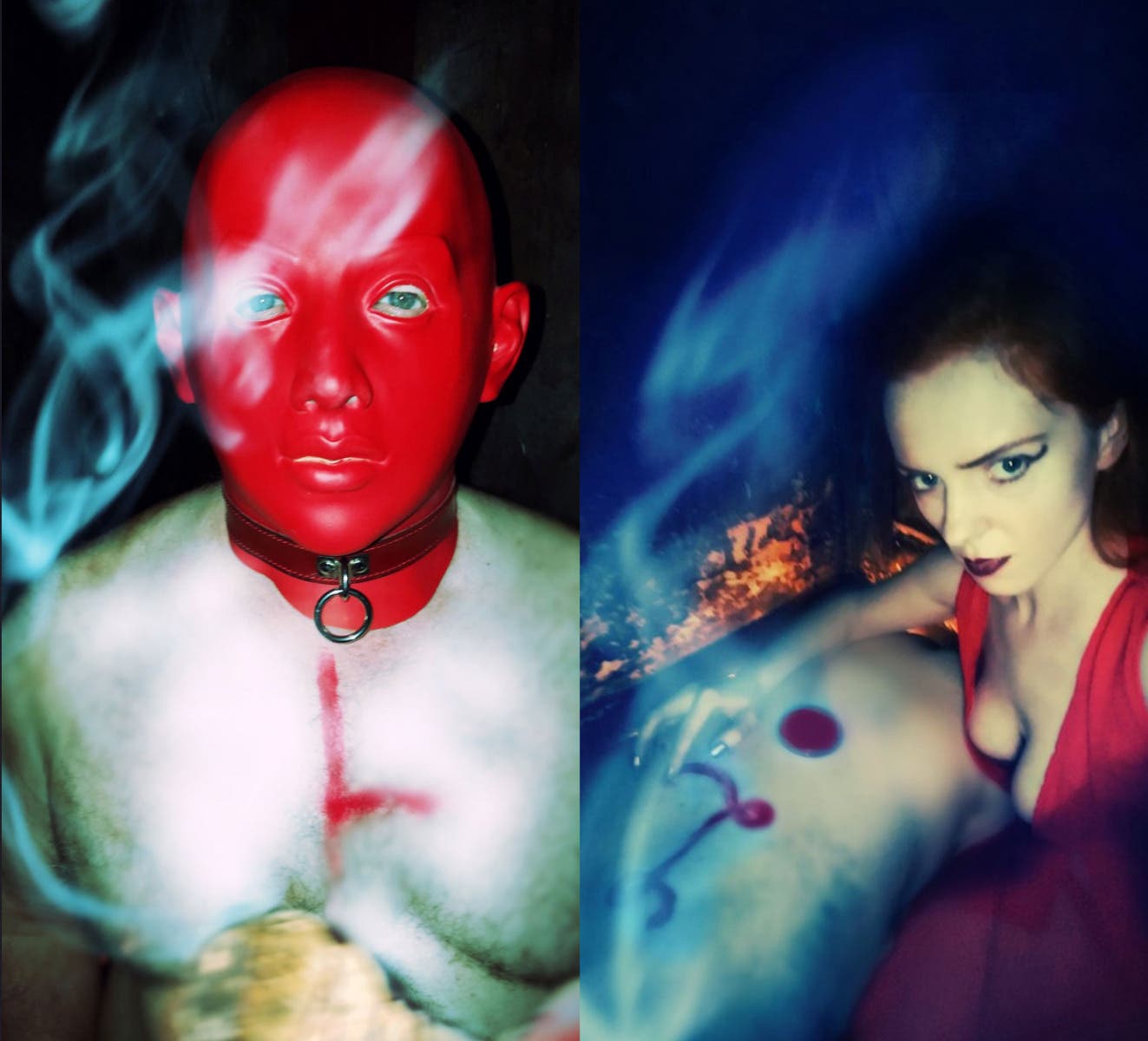 From checking out your social media, you appear to travel often to London. Do you also practice (is that the word?) in London as well as New York? 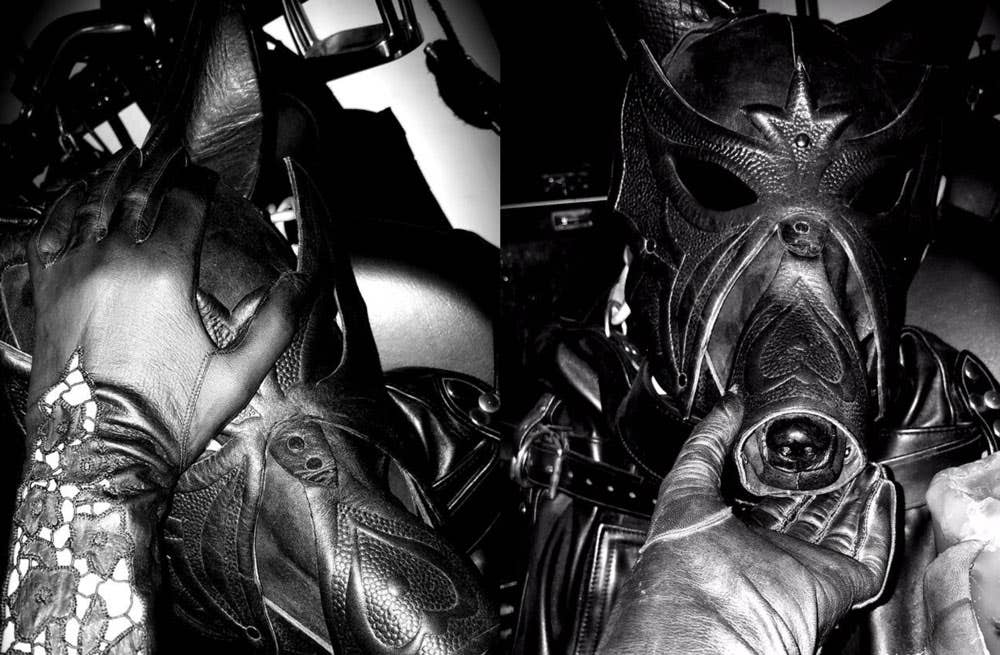 You refer often knowledgeably to ancient Greek and Roman and Egyptian holidays and ceremonies. Also Indian. Where you a history student?

I was a Classics student. I studied Latin in high school and went on to major in ancient Greek with a focus on death and mysticism. I wrote my undergraduate thesis on the mystery cult of Dionysos and my graduate thesis on Egyptian magic. My interests were always more personal than academic. More recently I took a course in Hindu philosophy and I have learned about other cultures from some of my subs. I weave this knowledge into my dominance and it attracts those who appreciate it. 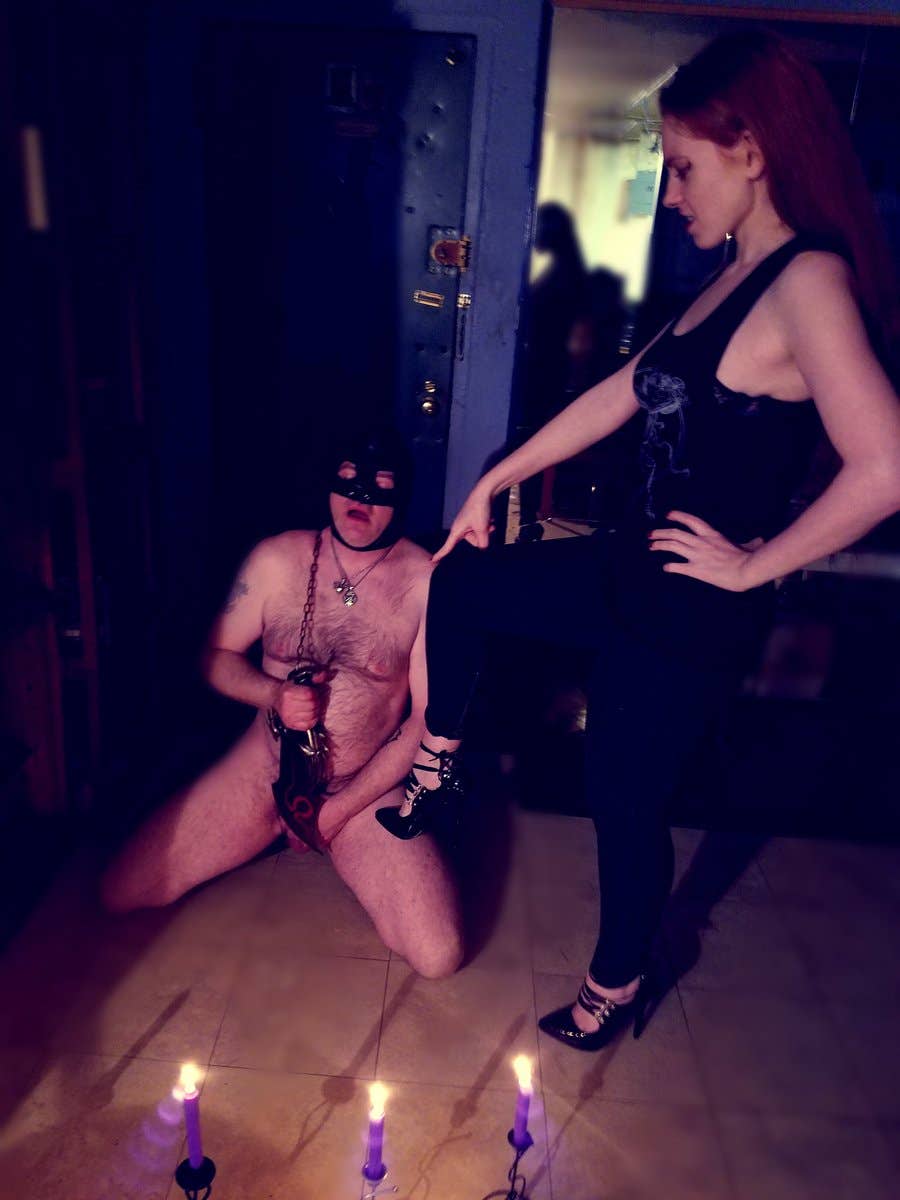 What are some of the scenes you specialize in?

I specialize in dark, creative rituals that provoke transformation and catharsis. I think of them as journeys to the underworld. What this involves is highly individual, but some of my favorite methods include mummification, sensory deprivation, and hypnosis. I enjoy psychic bondage and all kinds of metamorphosis, including feminization and animal transformation. I enjoy tearing men apart physically and psychologically. I enjoy long-term chastity training and cultivating religious devotion.

Not exactly “basic”, are you? What is your idea of a perfect weekend? Can you elaborate on the Tweet below or describe your ultimate weekend?

That was an excellent weekend. Among other things, I performed a sacrificial ritual on a visiting suppliant and attended a play party with my sadistic sister, Goddess Sekhemra, where we flogged a pain slut together. Later that night, I ended up doing a special hypnosis session with an initiate who had ventured out to the party especially to see me, and I spent the rest of the weekend channeling that energy into my creative work.

I am an introvert, so while I find the occasional party exhilarating, I also value quiet time alone or with my close friends. Outside of the dungeon, my ideal weekend often involves painting in my studio, reading, going to the opera or an art museum, or, once in a while, getting out of the city to be under the stars. 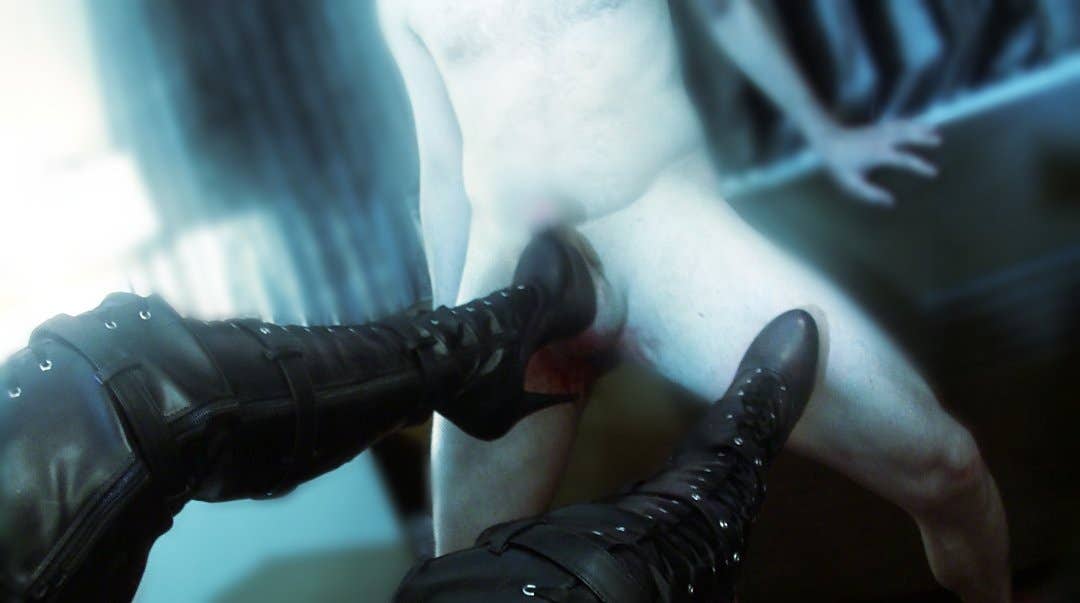 Do your clients often give you gifts? Is this part of the role play? I’ve read of men who get off giving gifts to please their domme, like to be taken to an ATM by their domme and just handing over $500.

Yes, my subs often bring me gifts as an act of worship. Some of the gifts are fetish-related, such as boots, latex clothing, or torture devices, while others pay homage to my creative interests, such as the lyre. I appreciate every one of these offerings and the devotion that they represent. For some, being made to give me gifts or money is part of the play—there is a natural eroticism to seeing me take what is mine, as they can attest. But I most appreciate those who give to me purely out of the desire to please. 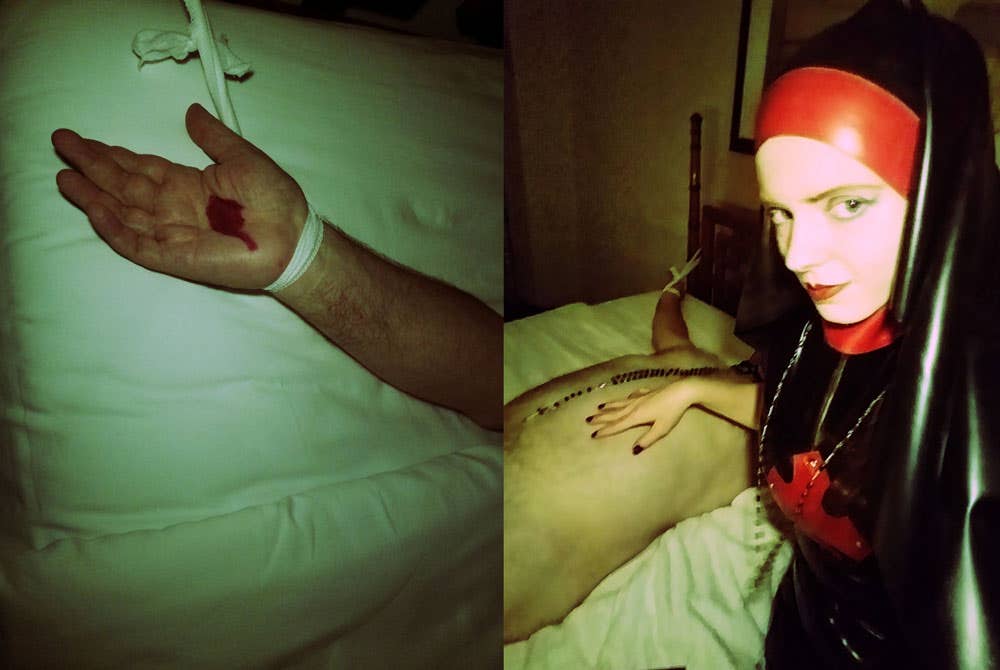 What do you think of “Bonding,” the new series about a dome and her gay BFF/assistant on Netflix. Getting a lot of negative feedback from actual dommes, as seen in this Rolling Stone article.

I haven't watched Bonding, but from the preview it looks boring and a bit cringeworthy. As a lot of sex workers are saying, it's upsetting to see yet another clichéd depiction of our work being promoted on the same platforms that are actively suppressing our voices and livelihoods. Besides, what we do in reality is so much more varied and interesting.

If you are interested in watching a film/ series that gets it right, I highly recommend "Remedy" and Mercy Mistress. They were both created by dominatrices based on their experiences and they portray different aspects of the work honestly and with emotional depth.

What about "Fetishes"? [an 1996 HBO documentary by filmed at Pandora's Box in New York City. Trailer. Photos of Pandora's Box from 1995.]

Yes, I loved that film and the Mistresses in it. I wish I could have been to the original space, especially the medical and throne rooms and those dreamy blue halls. Pandora's moved to its current location long before I was around and I do some of my sessions there. 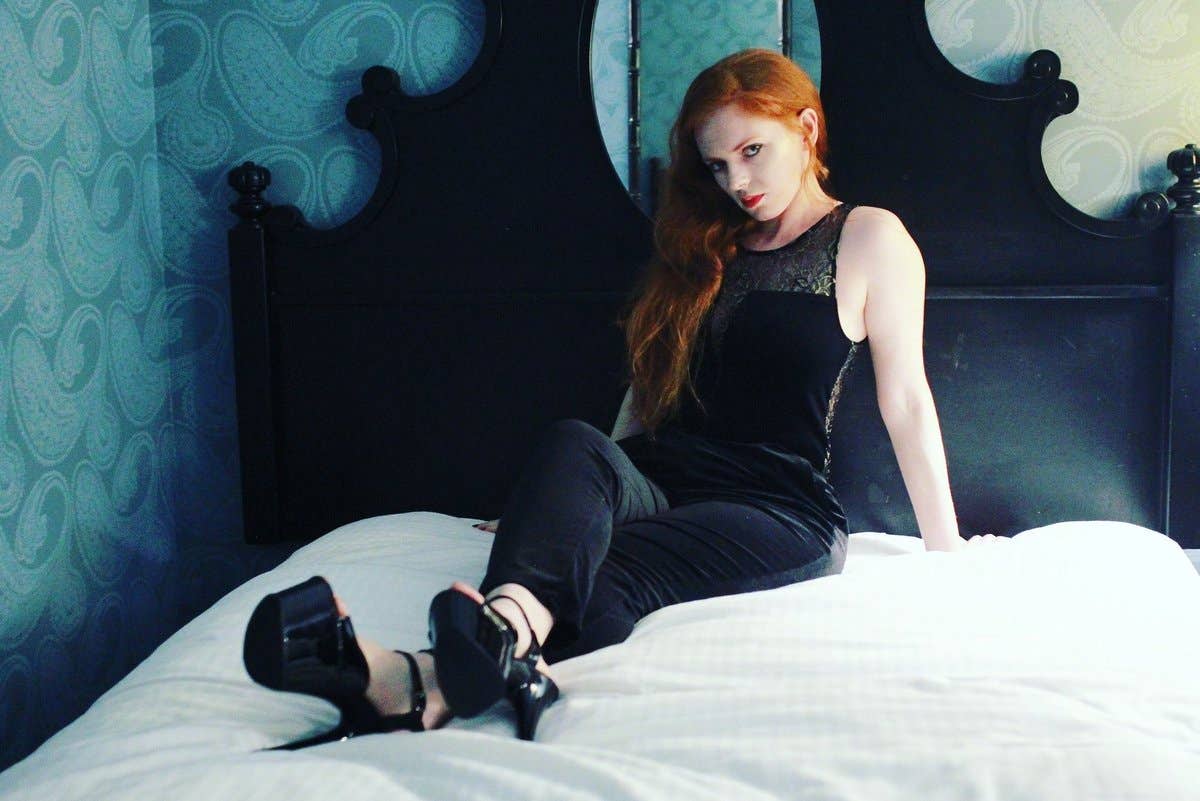 You are clearly a curious person and a reader. What are the last three books you enjoyed?

The Queen of the Air by John Ruskin
If Not, Winter: Fragments of Sappho translated by Anne Carson
The Magical Writings of Ithell Colquhoun edited by Steve Nichols 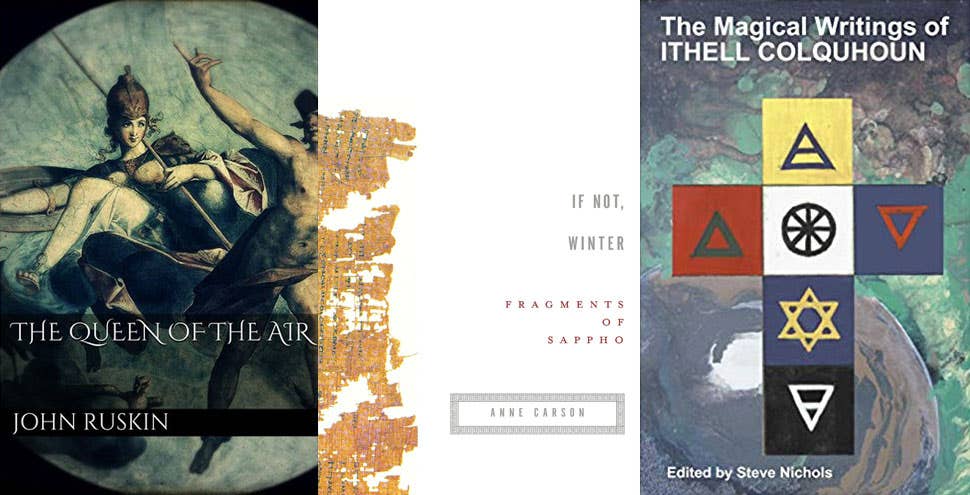 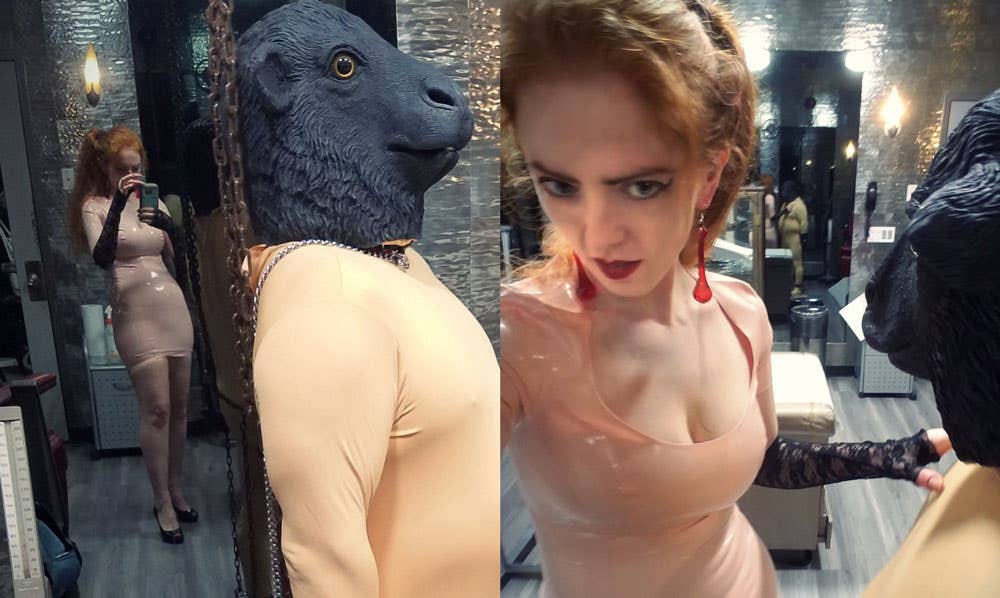 Have you read “Slutever” by Karley Sciortino or “The Joy of Sexus: Lust, Love, and Longing in the Ancient World Paperback” by Vicki León? Sciortino’s was far more fun to read. “Sexus” was too chatty and not that well written. Considering your interest and references to ancient gods and rituals, you might like the latter, regardless. If you’ve read either, what did you think?

I haven’t read either of these, but I have watched several episodes of Slutever. I especially enjoyed the one on kidnapping, with Mistress Darcy. I’ll have to check out the books.

Do you incorporate music in your work? If so what kind? Do you have, say, a top 5 albums or artists you go to to set the mood for sessions?

Yes, music is an important part of the ritual for me and I enjoy putting my playlists together. They vary depending on the overall mood I want to evoke/ the arc I want to create. Siouxsie and the Banshees, Dead Can Dance, and Depeche Mode are classics. Wumpscut is great for a more frenzied mood. I love sinister choral music like Poulenc's Gloria and Stabat Mater for religious scenes and my favorite torture music is the "Dance of the Furies" from the Gluck opera Orfeo ed Euridice. 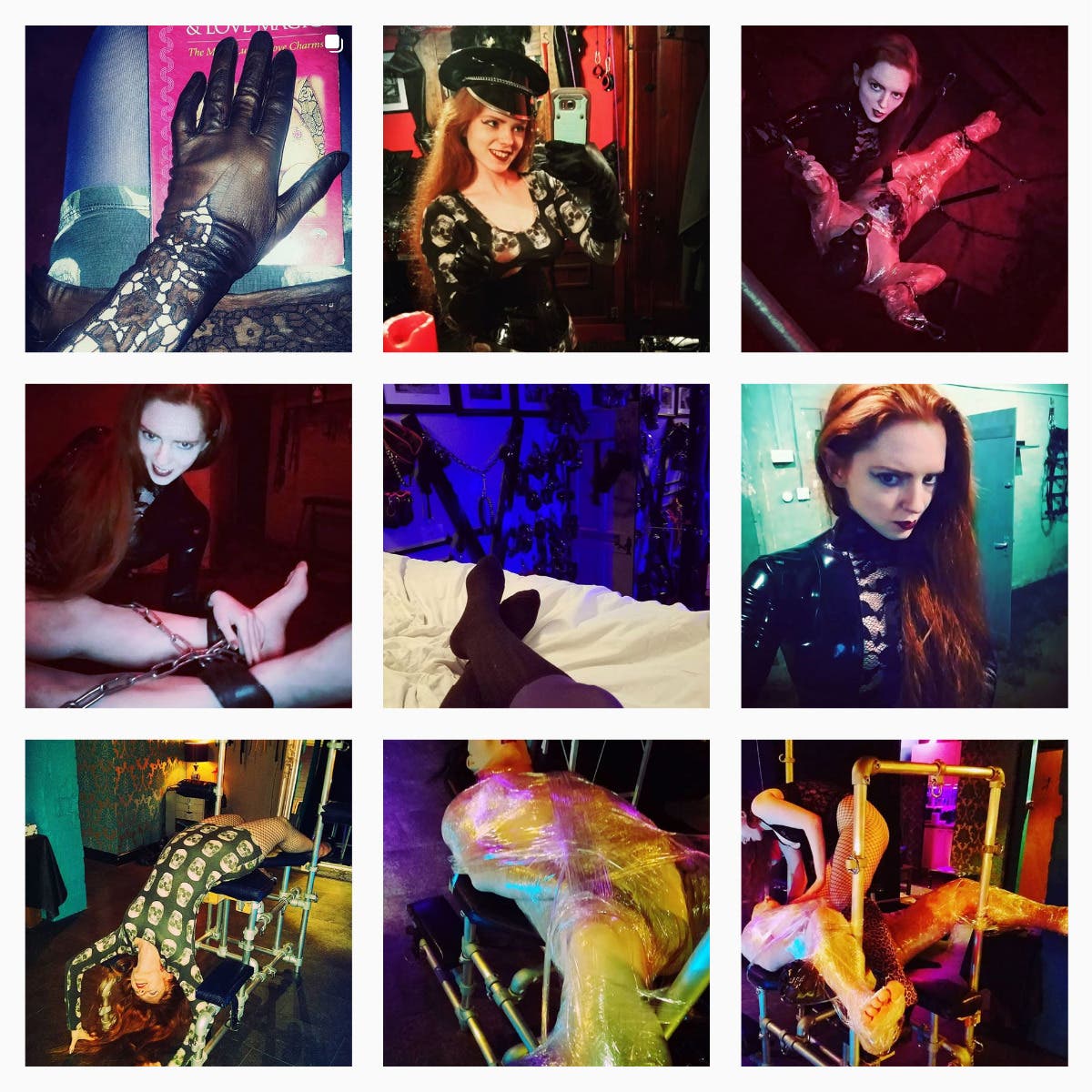 That was such a fun day.  I love my Zoro and take it everywhere-- in fact, when you emailed me, it was in my bag traveling home with me from a weekend trip. • 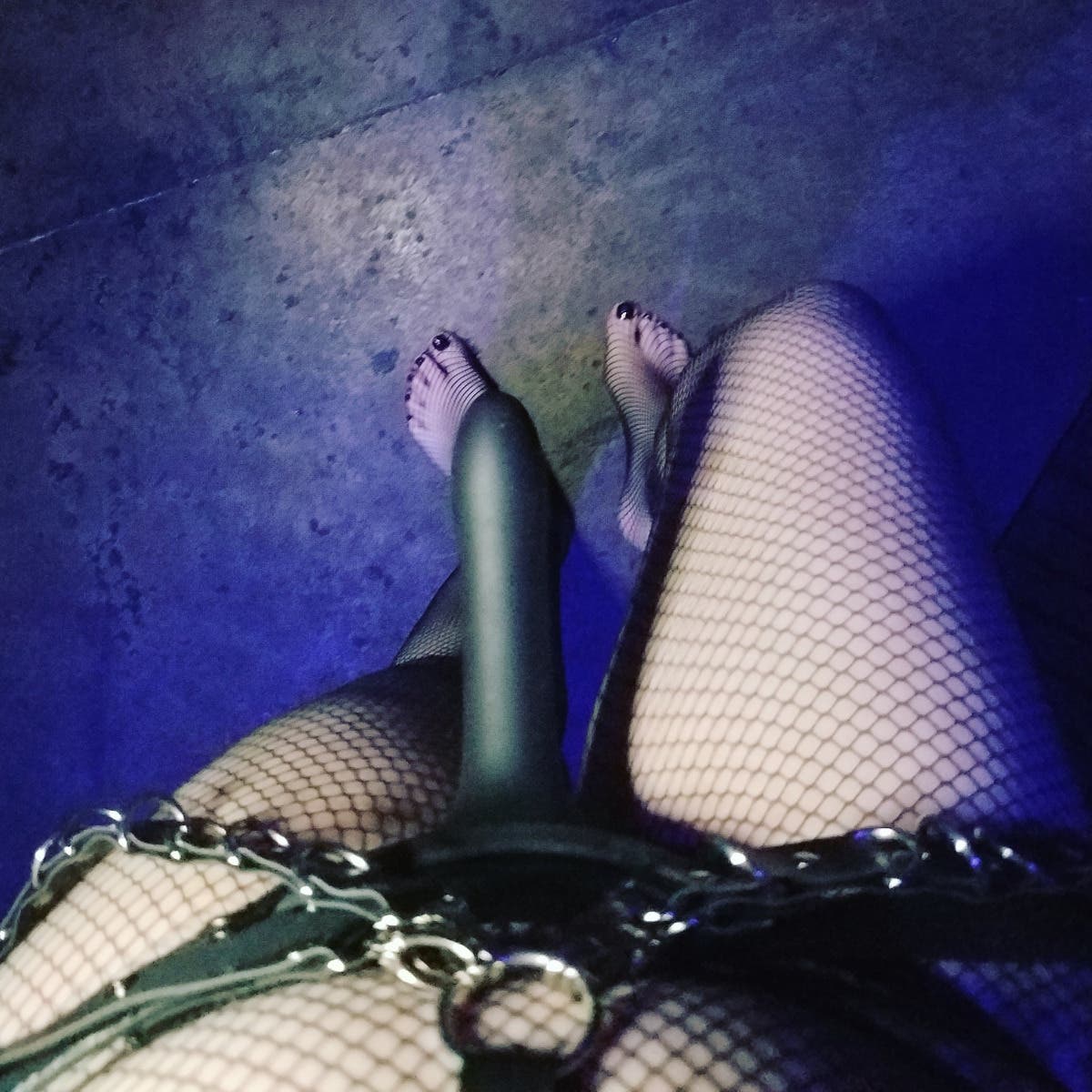