Sometime we think back in ye days of olde, everyone was buttoned up and as stuffy as an 8th grade required reading classic. But, dig, sniff, paw around or just expand your reading list or get your butt to a museum, and it is abundantly evident that our fascination with sex has been a fact of life since Eve waved that apple in Adam's face. 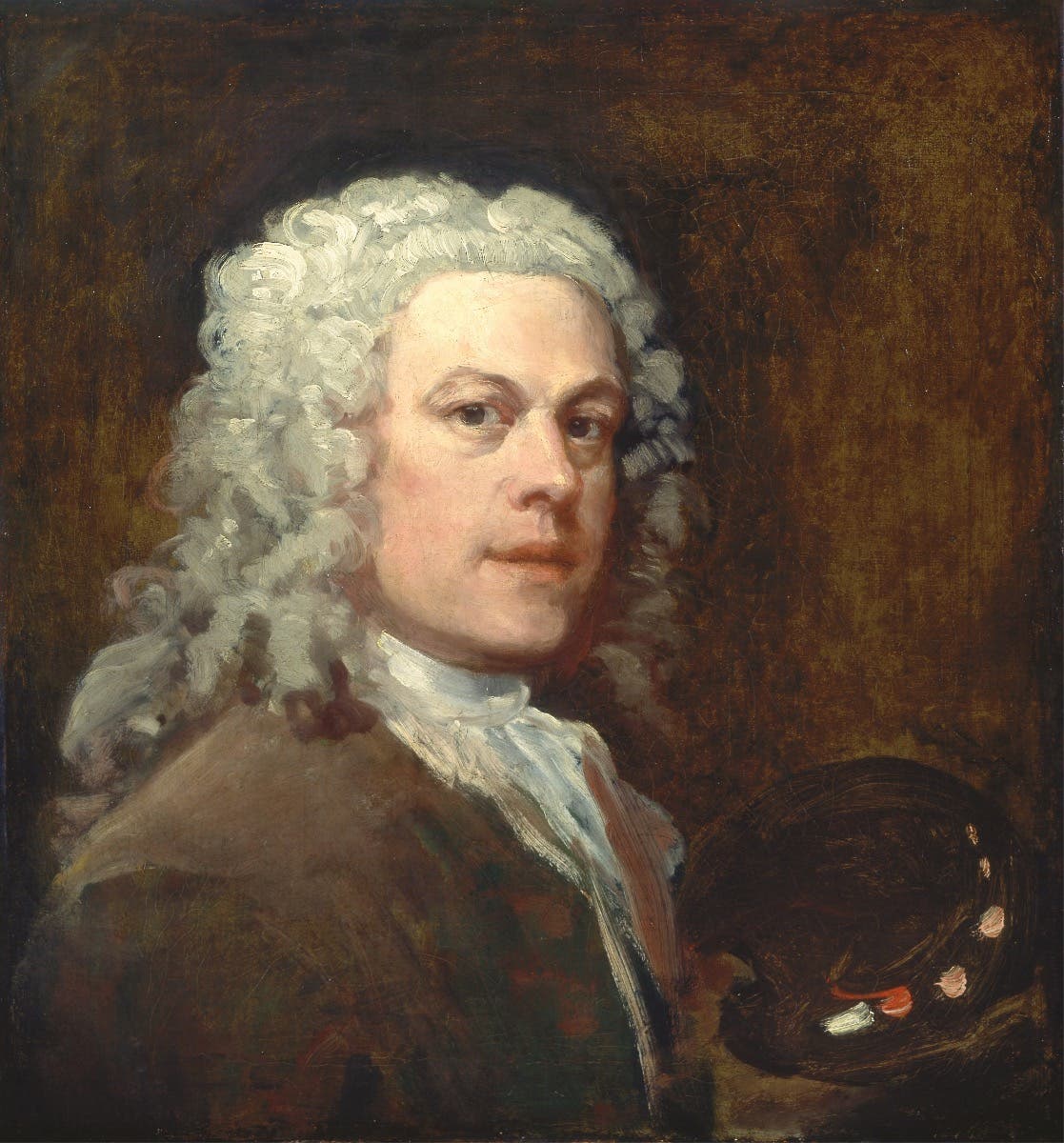 Meet 18th century painter, Wiliam Hogarth (1697-1764), an English painter, printmaker, pictorial satirist, social critic, and editorial cartoonist. Prolific, his most successful works where those in which he was poking fun at the upper classes as they were portrayed by in the works of contemporary painters like Jean-Antoine Watteau, François Boucher and Jean-Honoré Fragonard.

During the 1730s British painter William Hogarth produced three versions of a series showing a young couple before and after a sexual encounter. Engraved print versions of this series were extremently popular, partically becuase they references current affairs and "celebrities; he sold over 1200 prints.

"Hogarth’s Before and After series parodied fashionable fête galante* subjects by Antoine Watteau and others French artists, as well as modern high-life subjects by Jean-François du Troy. Such works often show a nobleman making elegant protestations of love to a lady." – Tate.org 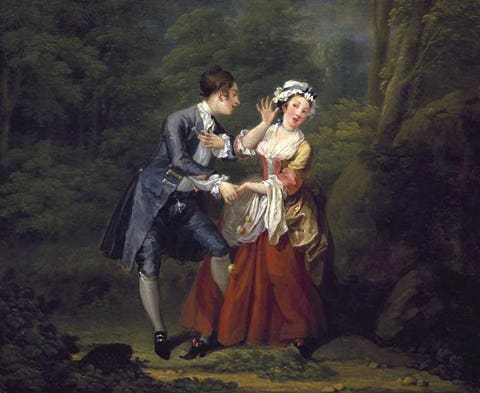 William Hogarth, "Before", 1730-1."Entitled Before and After (1730), it shows the same young couple in the woods by a tree before and after. . . fornication. Eighteenth-century London became known for its pleasure gardens, places people visited to indulge all of their senses, from music and theatre to scented gardens where prostitutes plied their trade. It is thus possible that Hogarth had in mind this particular setting for his lovers’ tryst. 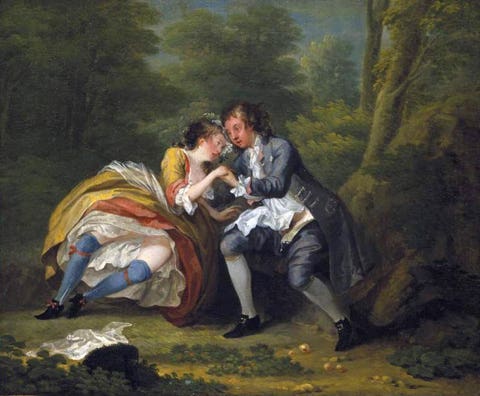 "While in the Before picture, the young woman is shown in a demure pose, gesturing to the young man "leave me alone" with her right hand, she is depicted in the After scene from such an angle that one can look into her open legs and bare thighs, as she half stands near a partner who has yet to lift up his pants." – "Sexual Mores" by Michéle C. Cone on artnet.com

"The ‘before and after’ format took a cynical turn, however, in the subsequent two series. Set in a lady’s bedchamber, the woman is cast as a reluctant prey and the man as a heartless predator..." 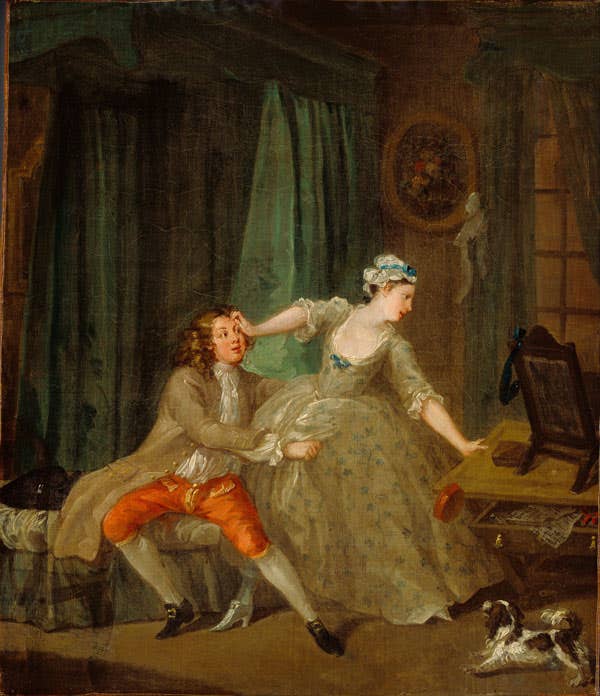 "The moral message of Hogarth’s Before and After series is underlined by the book positioned at the man’s feet in the After print. This refers to Aristotle’s dictum ‘Omne Animal Post Coitum Triste’ (every animal is sad after sex). While people might satisfy their sexual itch, Hogarth suggests, such sensual fulfilment is ultimately no fulfilment at all." – Tate.org 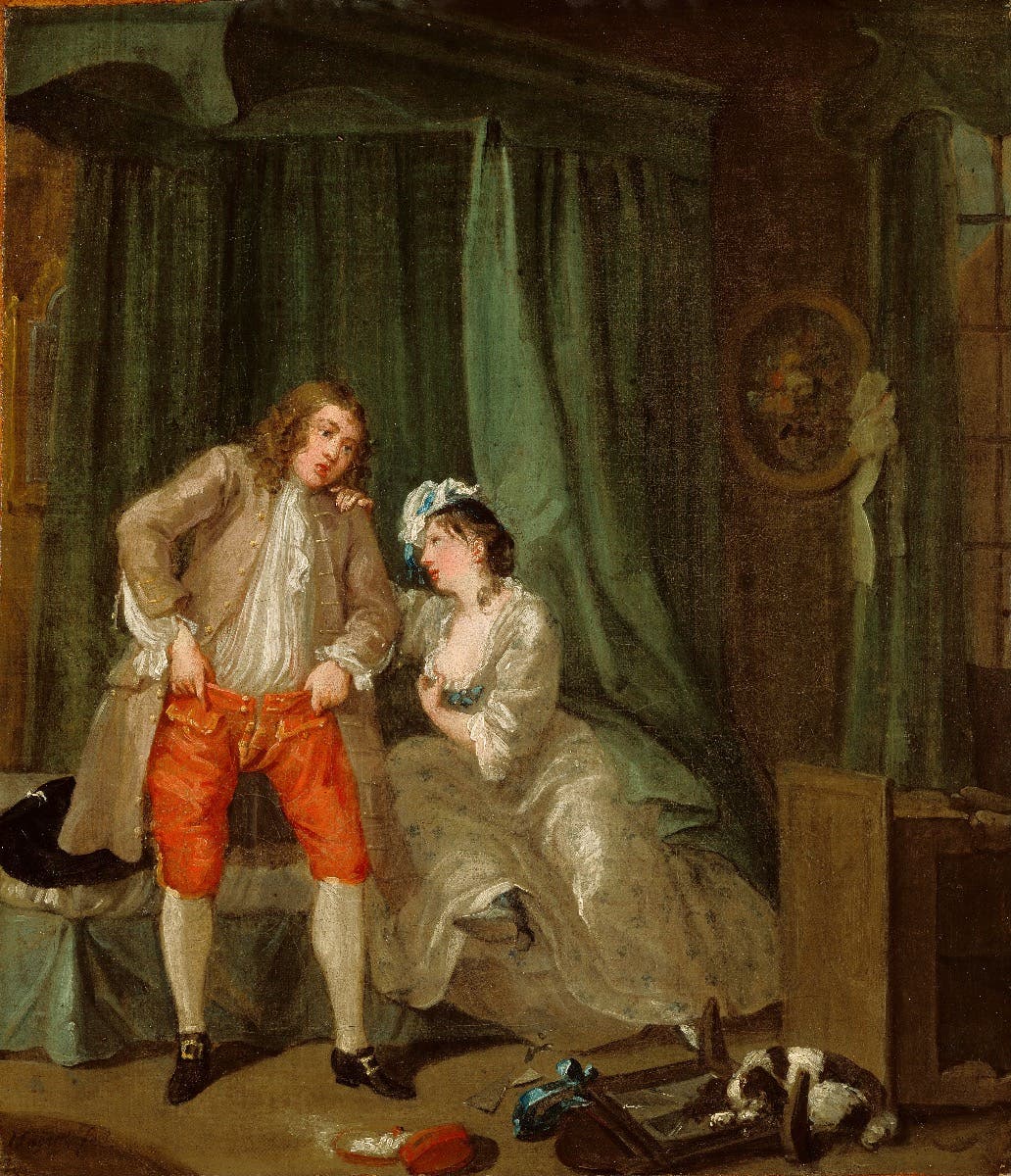 "Hogarth made additions to the print versions of Before and After. For example, a cherub can be seen lighting the fuse of a rocket in Before, denoting male sexual excitement...." 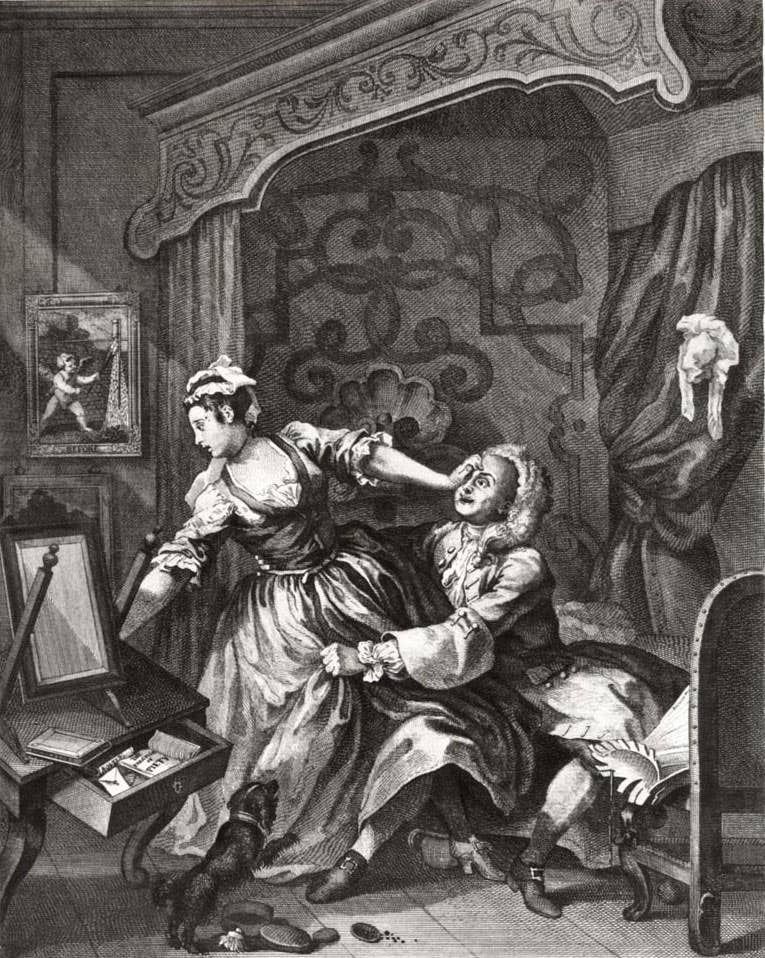 "In After, the laughing cupid gestures at the same rocket, now spent. The books seen on the falling dressing table probably symbolize innocence or virtue being corrupted. One refers to the Earl of Rochester, a notorious seventeenth-century rake, wit and poet, whose work was renowned for its blunt references to sexual subjects, including seductions. Another, The Practice of Piety, was a highly-respected Christian treatise, first published in 1601." – Tate.org 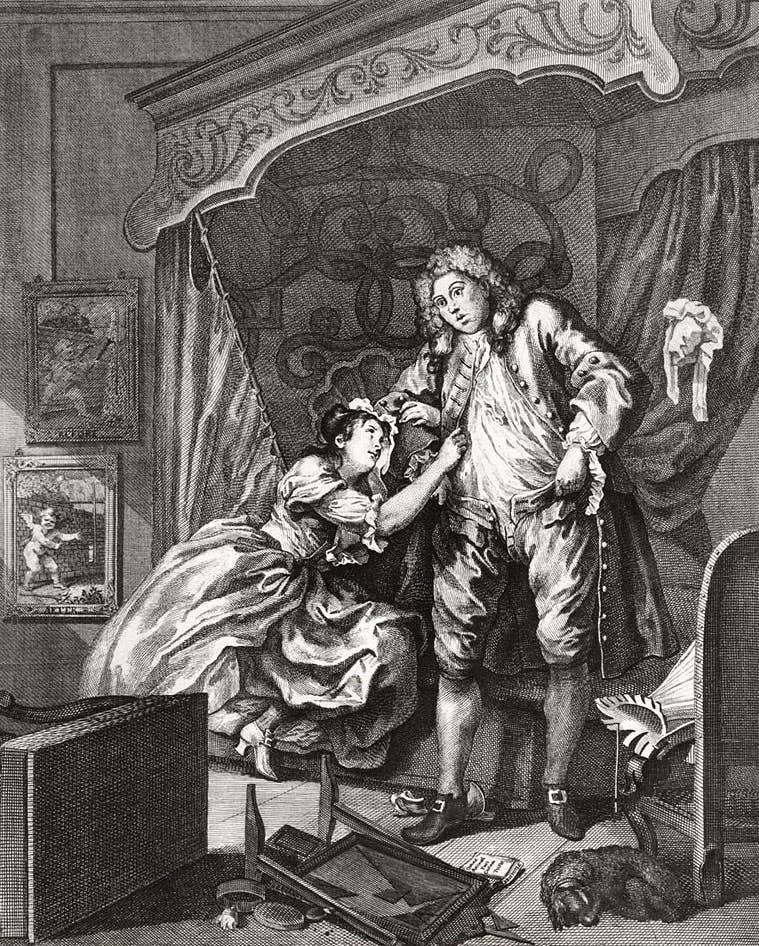 "I have generally found that persons who had studied painting least
were the best judges of it." — William Hogarth

More about William Hogarth on Wikipedia, WikiArt, and Tate.org, artnet.com, and Yale Center for British Art.

*an outdoor entertainment or rural festival, especially as depicted in 18th-century French painting.