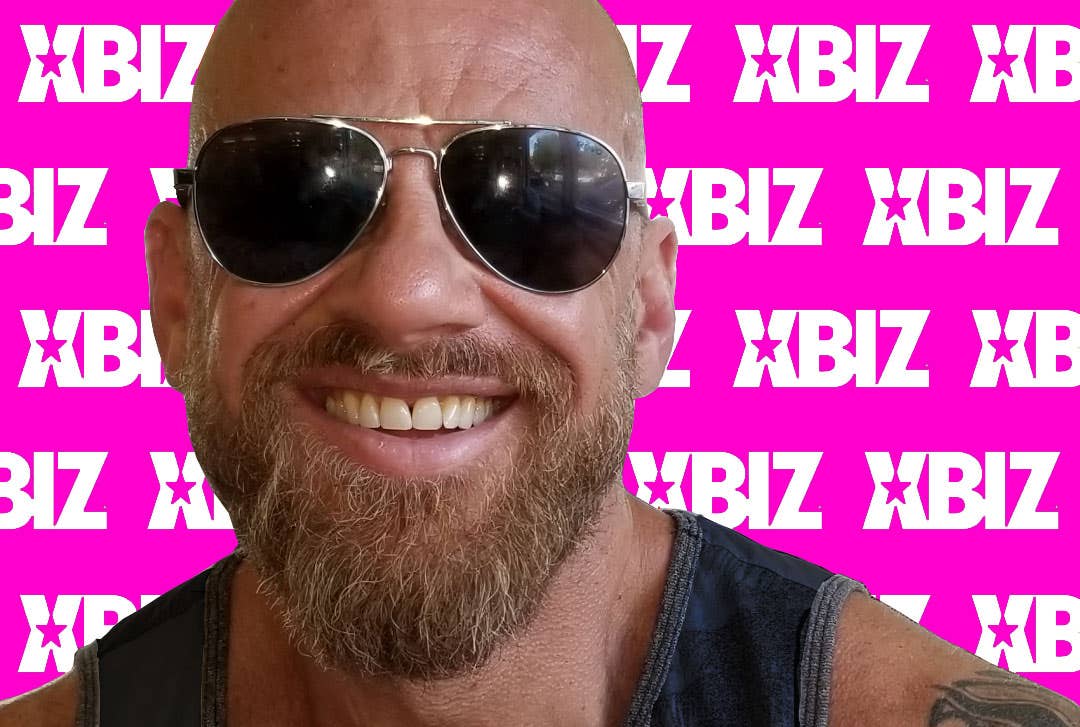 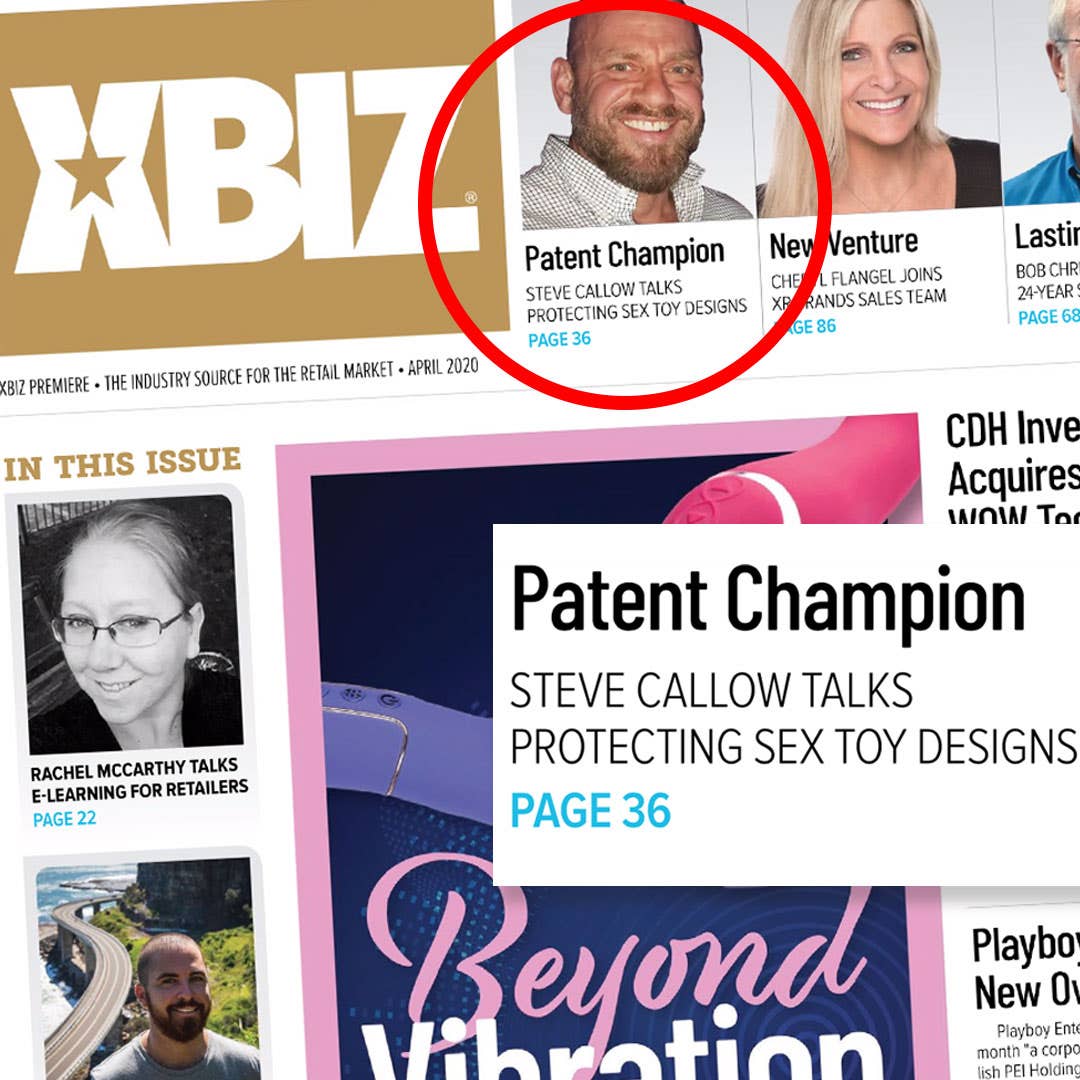 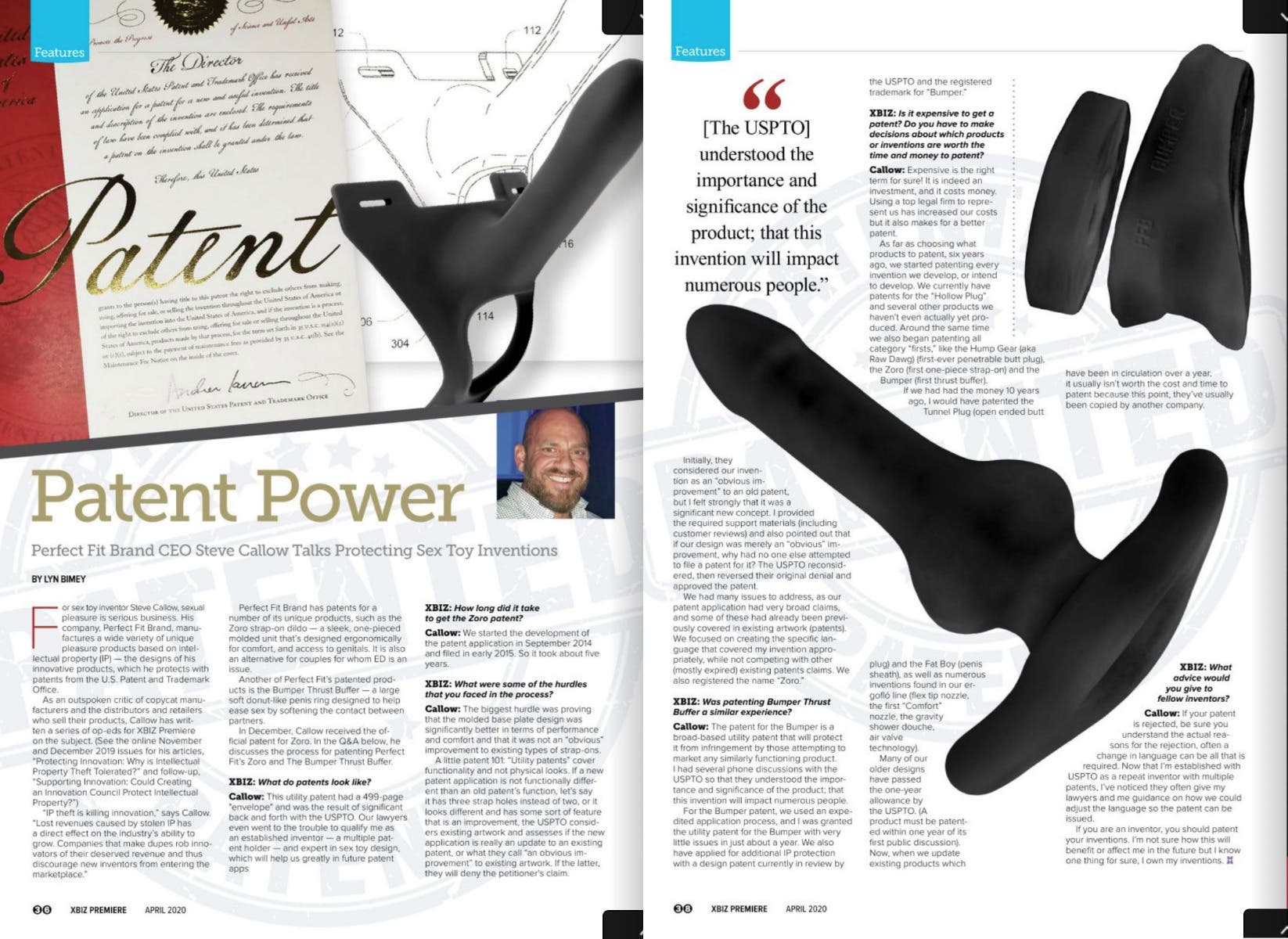 For sex toy inventor Steve Callow, sexual pleasure is serious business. His company, Perfect Fit Brand manufactures a wide variety of unique sex toys, known in the trade as “adult novelties. Key to Callow’s success is his intellectual property (IP), the designs of his innovative products, which he rigorously protects with patents from the United States Patent and Trademark Office.

As an outspoken critic of copycat manufacturers and the distributors and retailers who sell their products, Callow has written a series of op-eds for adult novelty trade publication, XBIZ Premiere on the subject. See the online November and December 2019 issues for his articles, “Protecting Innovation: Why is Intellectual Property Theft Tolerated?” and follow-up, “Supporting Innovation: Could Creating an Innovation Council Protect Intellectual Property?”

“IP theft is killing innovation,” says Callow. “Lost revenues caused by stolen IP has a direct effect on the industry’s ability to grow. Companies that make dupes rob innovators of their deserved revenue and thus discourage new inventors from entering the marketplace.”

While battling the copycats can be nearly as time consuming as applying for and securing a patent, if you believe in your product, the bottom line is get that patent!

Another among many patented products is the Bumper® Thrust Buffer™–a giant soft donut of a penis ring designed to help ease sex in cases where either the male partner is too long, or to soften the contact between partners who have less "cushion for the pushing,'" such as seniors and those with more prominent pelvic bones.

This past December, Callow finally received the official patent package for the Zoro™. Below he answers a few questions about the patenting process for both the Zoro® and The Bumper® Thrust Buffer™. 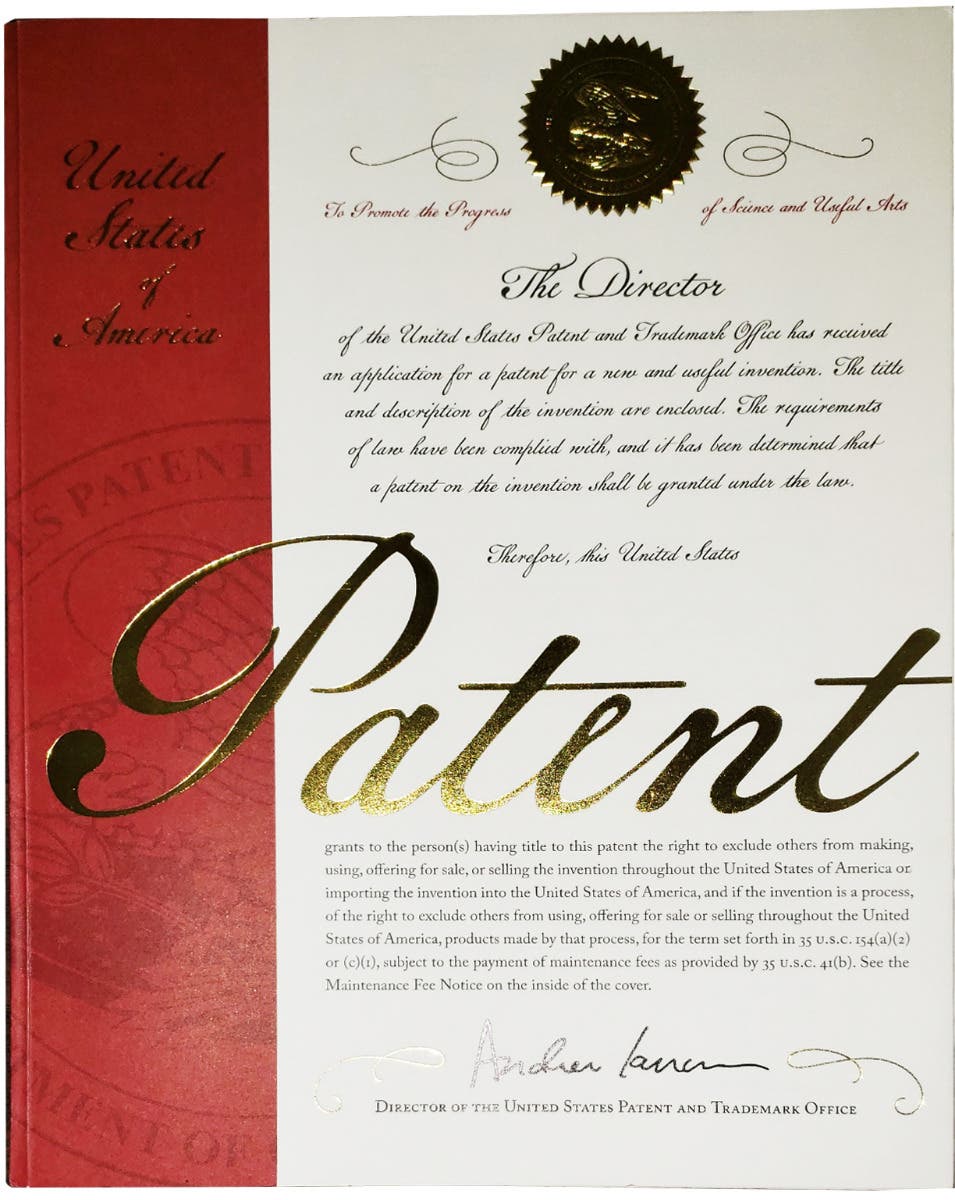 The patent for the Zoro® was 499 pages! Who knew patents were so voluminous?
Yes! This utility patent had a 499 page "envelope" and was the result of significant back and forth with the USPTO. Our lawyers even went to the trouble to qualify me as an established inventor–a multiple patent holder–and expert in sex toy design, which will help us greatly in future patent apps

How long did it take to get the Zoro® patent?
We started the development of the patent application in September 2014 and filed in early 2015.  So it took about five years.

What were the major hurdles?
The biggest hurdle was proving that the molded base plate design was significantly better in terms of performance and comfort and that was not an “obvious” improvement to existing types of strap-ons.

A little patent 101:  “Utility patents” cover functionality and not physical looks. If a new patent application is not functionally different than an old patent’s function, let’s say it has three strap holes instead of two, or it looks different and has some sort of feature that is an improvement, the USPTO considers existing artwork and assesses if the new application is really an update to an existing patent, or what they call “an obvious improvement” to existing artwork. If the latter, they will deny the petitioners claim.

Initially, they considered our invention as an “obvious improvement” to an old patent, but I felt strongly that it was a significant new concept. I provided the required support materials (including customer reviews) and also pointed out that if our design was merely an “obvious” improvement, why had no one else attempted to file a patent for it? The USPTO reconsidered, then reversed their original denial and approved the patent. 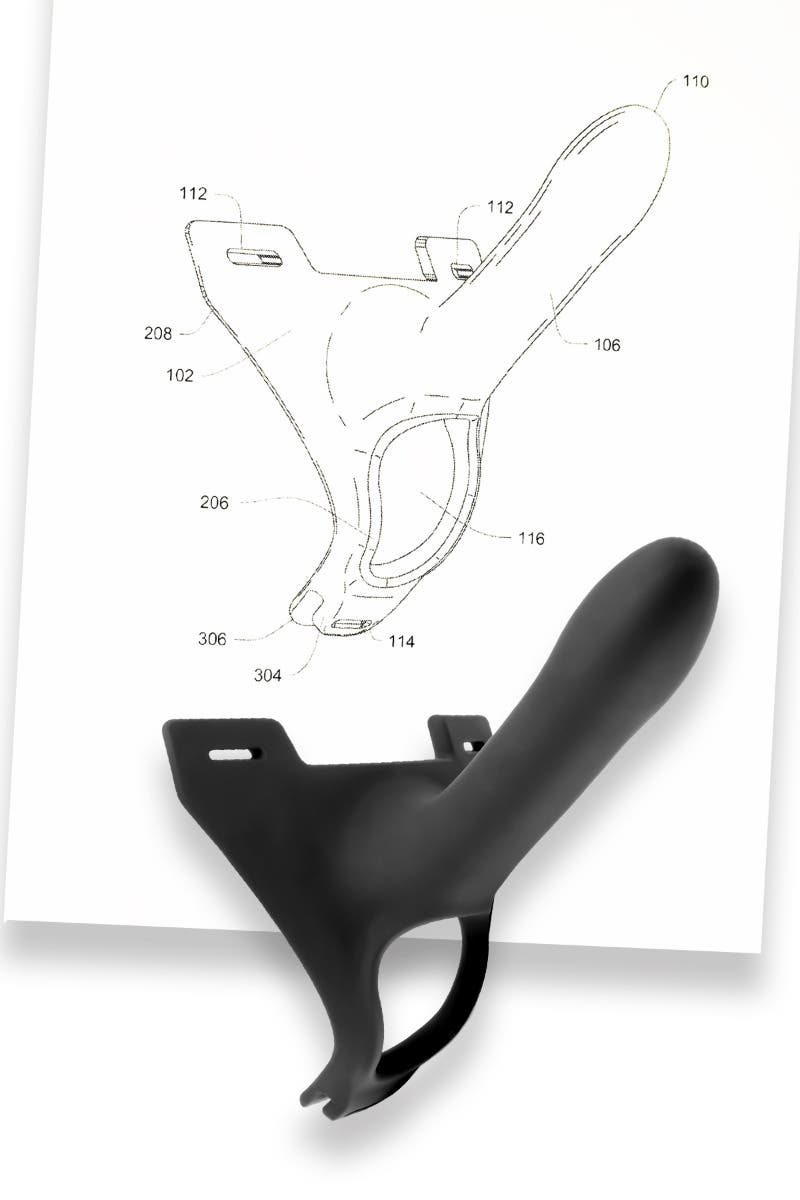 You mentioned having long phone conversations. What was the issue you were discussing and how was it resolved?
We had many issues to address, as our patent application had very broad claims, and some of these had already been previously covered in existing artwork (patents).  We focused on creating the specific language that covered my invention appropriately, while not competing with other (mostly expired) existing patents claims. We also registered the name “Zoro®.”

You’ve also patented the Bumper® Thrust Buffer™. Do you have the Bumper® patent? Was the process as arduous or long? Better, worse?
The patent for the Bumper® is a broad based utility patent that will protect it from infringement by those attempting to market any similarly functioning product. I had several phone discussions with the USPTO so that they understood the importance and significance of the product; that this invention will impact numerous people.

For the Bumper® patent, we used an expedited application process, and I was granted the utility patent for the Bumper® with very little issues in just about a year.  We also have applied for additional IP protection with a Design Patent currently in review by the USPTO and the Registered Trademark for “Bumper®.” 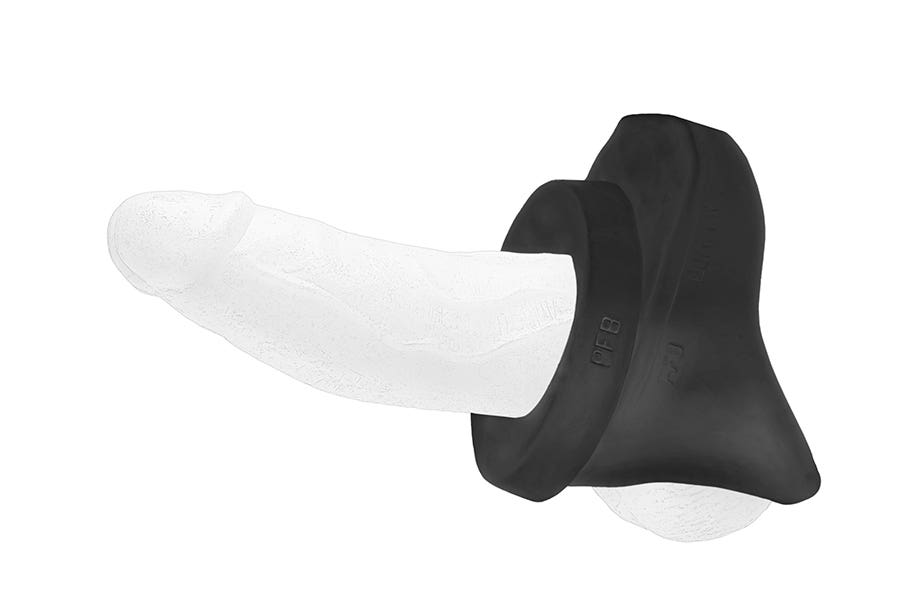 It's expensive, right? So, one assumes one has to choose products, inventions that they feel are worth the time and money to patent. Why the Zoro®, Bumper®?
Expensive is the right term for sure!  It is indeed an investment, and it costs money. Using a top legal firm to represent us has increased our costs but it also makes for a better patent.

As far as choosing what products to patent, six years ago, we started patenting every invention we develop, or intend to develop. We currently have patents for the “Hollow Plug” and several other products we haven’t even actually yet produced. Around the same time we also began patenting all category “firsts,” like the Hump Gear (aka Raw Dawg) (first butt plug that can be used for penetration), the Zoro® (first one piece strap-on) and the Bumper (first thrust buffer).

If we had had the money 10 years ago, I would have patented the Tunnel Plug (open ended butt plug) and the Fat Boy (penis sheath), as well as numerous inventions found in our ergofló™ line (flex tip nozzle, the first “Comfort” nozzle, the gravity shower douche, air valve technology).

Many of our older designs have passed the one year allowance by the USPTO. (A product must be patented within one year of its first public discussion). Now, when we update existing products which have in circulation over a year, it usually isn’t worth the cost and time to patent because this point, they’ve usually been copied by another company.

Any advice to fellow inventors?
If your patent is rejected, be sure you understand the actual reasons for the rejection, often a change in language can be all that is required.  Now that I’m established with USPTO as a repeat inventor with multiple patents, I’ve notice they often give my lawyers and me guidance on how we could adjust the language so the patent can be issued.

Comments to the industry?
If you are an inventor, you should patent your inventions, I’m not sure how this will benefit or affect me in the future but I know one thing for sure, I own my inventions. •