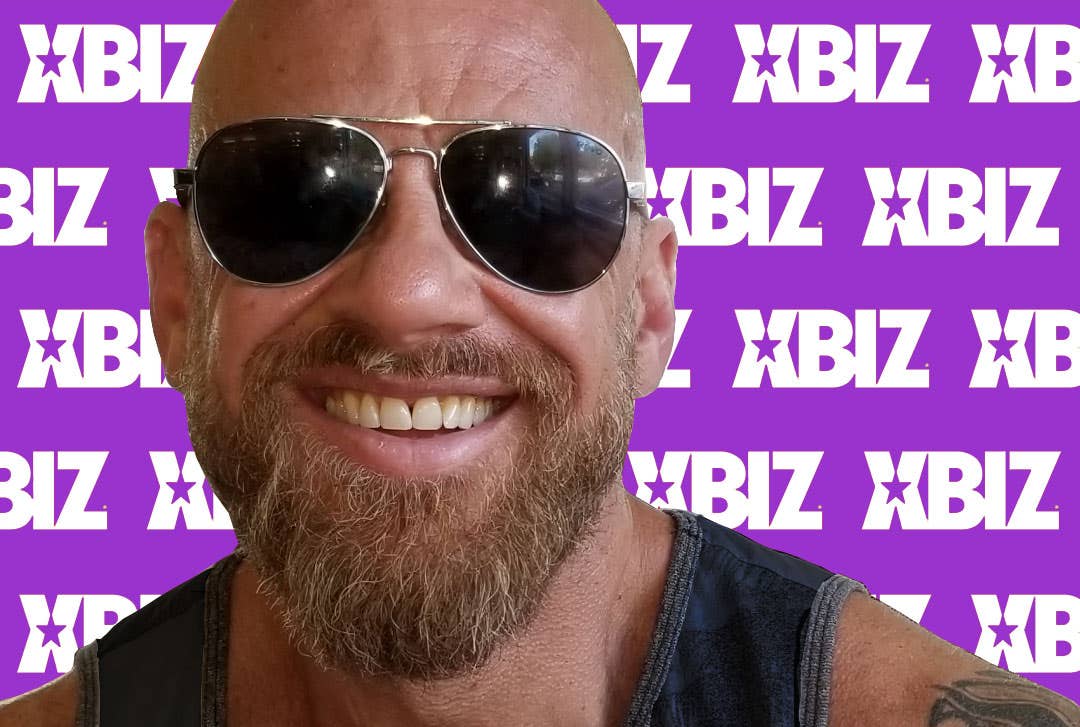 Perfect Fit Brand CEO Steve Callow asks, "Why do we tolerate it?"

Perfect Fit Brand CEO, innovator and inventor Steve Callow discusses how intellectual property theft in the sex toy biz, and wonders why is it so tollerated. 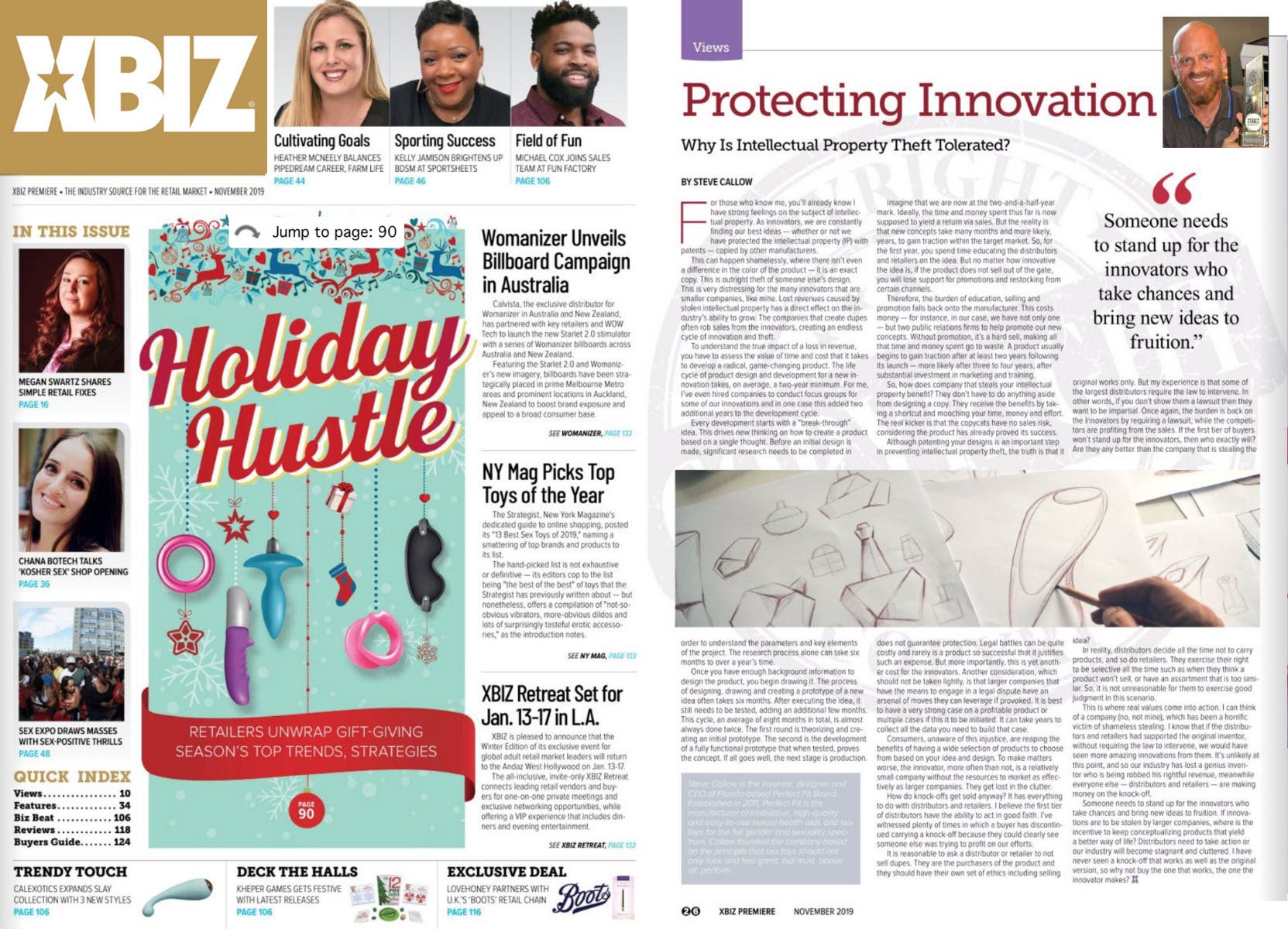 For those who know me, you’ll already know I have strong feelings on the subject of Intellectual Property.  As innovators, we are constantly finding our best ideas, whether or not we have protected the Intellectual Property (IP) with patents or not, copied by other manufacturers.  This can happen shamelessly, where there isn’t even a difference in the color of the product, it is an exact copy. This is outright theft of someone else’s design. This is very distressing for the many innovators that are smaller companies, like mine. Lost revenues caused by stolen Intellectual Property has a direct effect on the industry’s ability to grow. The companies that create dupes often rob sales from the innovators, creating an endless cycle of innovation and theft.

To understand the true impact of a loss in revenue, you have to assess the value of time and cost that it takes to develop a radical, game-changing product. The life cycle of product design and development for a new innovation takes, on average, a two-year minimum.  For me, I’ve even hired companies to conduct focus groups for some of our innovations and in one case this added two additional years to the development cycle. Every development starts with a “break-through” idea. This drives new thinking on how to create a product based on a single thought. Before an initial design is made, significant research needs to be completed in order to understand the parameters and key elements of the project. The research process alone can take six months to over a year’s time.

Once you have enough background information to design the product, you begin drawing it. The process of designing, drawing and creating a prototype of a new idea often takes six months. After executing the idea, it still needs to be tested, adding an additional few months. This cycle, an average of eight months in total, is almost always done twice. The first round is theorizing and creating an initial prototype. The second is the development of a fully functional prototype that when tested, proves the concept. If all goes well, the next stage is production.

Imagine that we are now at the two-and-a-half-year mark. Ideally, the time and money spend thus far is now supposed to yield a return via sales. But the reality is that new concepts take many months and more likely, years, to gain traction within the target market. So, for the first year, you spend time educating the distributors and retailers on the idea. But no matter how innovative the idea is, if the product does not sell out of the gate, you will lose support for promotions and restocking from certain channels. Therefore, the burden of education, selling, and promotion falls back onto the manufacturer. This costs money, for instance in our case, we have not only one, but two public relations firms to help promote our new concepts. Without promotion, it’s a hard sell, making all that time and money spent go to waste. A product usually begins to gain traction after at least two years after its launch, more likely after three to four years, after substantial investment in marketing and training.

So, what is the upside for a company that steals your Intellectual Property and makes a replica? The upside is that they don’t have to do anything aside from designing a copy. They receive the benefits by taking a shortcut and mooching your time, money and effort. The real kicker is that, when duping your product, they have no sales risk considering the product already proved its success.

Although patenting your designs is an important step in preventing intellectual property theft, the truth is that it does not guarantee protection. Legal battles can be quite costly and rarely is a product so successful that it justifies such an expense. But more importantly, this is yet another cost for the innovators. Another consideration, which should not be taken lightly, is that larger companies who have the means to engage in a legal dispute such as this, have an arsenal of moves they can leverage if provoked. It is best to have a very strong case on a profitable product or multiple cases if this it to be initiated.  It can take years to collect all the data you need to build that case.

Consumers, unaware of this injustice, are reaping the benefits of having a wide selection of products to choose from based on your idea and design. To make matters worse, the innovator, more often than not, is a relatively small company without the resources to market as effectively as larger companies. They get lost in the clutter.

How do knock-offs get sold anyway? It has everything to do with distributors and retailers.  I believe the first tier of distributors have the ability to act in good faith.  I’ve witnessed plenty of times in which a buyer has discontinued carrying a knock off because they could clearly see someone else was trying to profit on our efforts.

It is reasonable to ask a distributor or retailer to not sell dupes.  They are the purchasers of the product and they should have their own set of ethics including selling original works only. But my experience is that some of the largest distributors require the law to intervene. In other words, if you don’t show them a lawsuit then they want to be impartial.  Once again, the burden is back on the innovators by requiring a lawsuit, while the competitors are profiting from the sales. If the first tier of buyers won’t stand up for the innovators, then who exactly will? Are they any better than the company that is stealing the idea?

In reality, distributors decide all the time not to carry products, and so do retailers.  They exercise their right to be selective all the time when they think it won’t sell, it is not a product that they carry or their assortment is similar.  So, it is not unreasonable for them to exercise good judgment in this scenario.

This is where real values come into action. I can think of a company (no, not mine), which has been a horrific victim of shameless stealing.  I know that if the distributors and retailers had supported the original inventor, without requiring the law to intervene, we would have seen more amazing innovations from them.  Unlikely at this point and so our industry has lost a genius inventor who is being robbed his rightful revenue, meanwhile everyone else, distributors and retailers are making money on the knock-off.

Someone needs to stand up for the innovators who take chances and bring new ideas to fruition.  If innovations are to be stolen by larger companies, where is the incentive to keep conceptualizing products that yield a better way of life? Distributors need to take action or our industry will become stagnant and cluttered. I have never seen a knock-off that works as well as the original version, so why not buy the one that works, the one the innovator makes?